Please join the Wharton, HBS and Kellogg clubs for extraordinary access to two of the most powerful women shaping Dallas law enforcement

Dallas County District Attorney Faith Johnson and Dallas County Sheriff Marian Brown open up about their journey, vision for the future and the outlook for others in leadership in one of the toughest industries in the country - law enforcement! 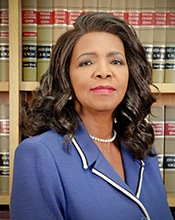 As a judge, she handled thousands of felony cases ranging from drug possession and theft to sexual assault, child abuse, and capital murder. After leaving the bench, Ms. Johnson practiced with a non-profit law firm for two years before establishing Faith Johnson & Associates, L.L.P. in 2009.

In 2014, Ms. Johnson was appointed by Texas Governor Rick Perry to the Texas Public Safety Commission, where she was one of five Commissioners who oversee homeland security, border patrol, and terrorism in Texas. She served on the commission until December 2016.

Ms. Johnson received a bachelor’s degree in psychology and a master’s in community counseling from Georgia State University, and a law degree from Texas Southern University. Originally from Atlanta, Georgia, she is the youngest of 13 children born to Benjamin and Eva Simmons. 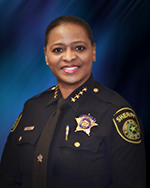 Sheriff Brown was promoted to the rank of Lieutenant, and later named to the position of Assistant Chief of Police until 2014, when she retired and joined the Dallas County Sheriff’s Department to serve as Chief Deputy in charge of General Services.

Sheriff Brown has a Bachelor’s of Arts Degree from University of Texas at Arlington and a Master Peace Officer Certification. She is also a graduate of the International Law Enforcement Institute’s Management College and the FBI National Academy Associates Command College.

Special Thank You to This Event's Sponsor(s):

EVENT DETAILS:
Date: Wed., May 9
Time: 5:00pm   Check-in and Reception with wonderful hors d'oeuvres!!
5:30pm   Presentation and Q&A
6:30pm   Adjourn
Location: Jones Day, 2727 North Harwood Street, Suite 500, Dallas, Texas 75201
Parking: There is plenty of free parking at the base of the building and in the underground garage.

Want to save by becoming a Member or just support the local alumni? Click here to Join the Club!

CANCELLATION POLICY: All cancellations must be received by the early registration date BEFORE the event or the attendee who made the reservation may not receive a refund, regardless of participation, due to costs associated with the reservation.